It’s just a liberating experience to be able to put your ideas onto the screen with your hands instead of trying to tell somebody else what your vision is.

For 30 years, Joe Elmore has been the host of “Tennessee Crossroads,” the longest-running and highest-rated program on public television. In this latest podcast, Elmore explains how the vision to produce a show that might last 2-4 years turned into a 30+-year adventure that is still going strong today. The winning formula of “Tennessee Crossroads” was realized early on – it seemed to be exploring destinations, “kind of cool places to go on the weekend,” in our own backyard. The “Crossroads” team liked to include little out-of-the-way restaurants, mom-and-pop establishments, and places not on the Tennessee tourist maps, as Elmore says, “a kind of discovery so that people can be in on the surprise.” 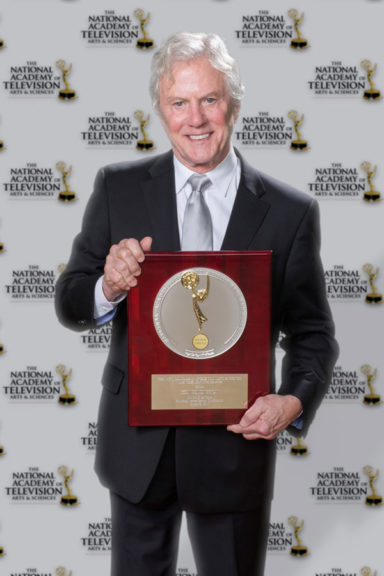 When Elmore grew up in a small town in eastern Arkansas, not too far from the Mississippi Delta, he never dreamt he would be doing this for a living. He played music – and still does for a hobby and sometimes relaxation – but he was fascinated with television and film. As a college student in Memphis, he immersed himself in radio, TV, and film classes. He felt that this was where he belonged. From there he got a job at a local station to do feature stories. He co-hosted “PM Magazine” until it got canceled then he moved to Nashville to try his luck there. One thing led to another – including a short-lived gig at TNN (The Nashville Network) – until the hosting job for a new show called “Tennessee Crossroads” with Nashville Public Television (NPT) came his way. That was in 1987. While hosting “Crossroads” he also did a side-hustle hosting the “Detroit Muscle” and “Horsepower” car shows for more than 20 years. He laughingly shares that when on the road and approached by a programming enthusiast he can usually tell which show the folks know him from by the clothes they are wearing. “I can look at them and … usually if it’s a guy and he’s wearing a Chevrolet or Ford tee or a racing shirt … I know where he’s from. But, otherwise, if they’re just normal looking people, that’s ‘Crossroads,’” he chuckled.

In this Squeeze the Day podcast, Elmore shares a bit of what it takes to produce a long-standing television show. He’s quick to credit a solid technical road crew and explains the necessary changes that came about when COVID-19 hit.

Q: I know you travel with a group that has consistently worked with you over the years and I have heard that you’re kind of like a band of brothers … you protect one another?

A: Yeah. Jim DeMarco, who is our program director and sometimes field director, too, goes out on shoots — especially to the restaurants — because he likes to eat a lot. He and I have been there since day one. That was his first job, working at channel 8, NPT. Also, Ed Jones and Will Pedigo.

Q: So, you were saying, you’ve been on the road together and you’ve kind of looked out for each other?

A: You know, we have a routine when we go on the road. We decide who’s going to drive, who’s had the most sleep lately. And then we get to a place, and I go in and do the talking and then kind of warm the people up and figure out what we’re going to do. And as soon as I do that, they’re setting up equipment for the interview. That’s always the first, on any stop pretty much, if it’s a shop owner we interview him, or the restaurant owner or the artist or whomever the person behind the story’s going to be, or persons. After the interview, then we try to get creative.

And I have a photographer I love to work with, Paul Mojonnier. I mean he’s just a workhorse. They’re all workhorses, all the photographers. We spend the rest of our morning pretty much after we’ve done the interviews … trying to stay out of the way of the camera. I mean he insists on, “Leave me alone. I know what you want. I’ve worked with you a while, I know what you want.” So, he gets it. Makes it too easy, really.

Q: I want to talk a little bit about the early days of the show. You know, in those probably 1980s, early ’90s, you probably just showed up at a place and got ready to do Crossroads and people likely said, “I don’t even know what ‘Tennessee Crossroads’ is.”  And now, do people just flock to greet you because they’ve seen your face in their house for 30 years?

A: That process started with a telephone call when I’d say, Hey, we’re this television show called “Tennessee Crossroads.” I hope you watch it. [I would be asked] “What’s that? Is that a magazine or radio show? What do you do?” We had to do a lot of education on the phone before we even got to the subject of doing a story on them. So yeah, it’s great nowadays when they know who you are and where you’re from … They know us. They get excited. I’m happy about that.

When we asked how Elmore feels knowing some of his fans grew up watching the show with their parents, he offers a glimpse of his cynical side and sense of humor with one simple word: “old.”

Yet, the intergenerational appeal of the show is part of its longevity. People enjoy watching these stories unfold and learning about hidden gems in their backyard and those backyards are always evolving … Of course, with the COVID-19 pandemic, production on “Tennessee Crossroads” had to shift accordingly.

Q: Now I want to ask you for some inside scoop on “Crossroads?” We’ve all been cooped up for a little bit, and I know you’ve learned a lot through COVID …

A: Well, we didn’t miss a beat. We kept the show going. We really got serious. We had to rerun some shows to figure out what we could do to keep this thing going, because the studio was dark. Employees started working from home, and even the editors edited from home and so forth. I had to keep hosting the show. I did that from my home … And, I had to set up a camera, or later on I used my iPhone, I would record on Adobe Audition software, which is pretty professional. But I had to do everything myself. I had to turn the camera on, get in front of the camera, try to memorize the script beforehand, edit out all the bad parts and send it in via email. And it was a challenge. It was fun at first, but not after a while.

He offered another interesting glimpse of his reality, “I also had to make sure my home looked okay, and I didn’t have socks and underwear hanging in the background. It was a challenge. But after a while with the safety precautions and masks, we got back in the studio and made it happen. So, I’m glad we’re back.”

Q: I think we’ve all learned so much through COVID. One of my coworkers was talking about outdoor treasures and things in Tennessee that are really worth exploring.  Tell us a little bit about some of your favorite haunts in Tennessee.

A: During COVID-19, the show highlighted some of the many greenways around Nashville and even used a drone to capture aerial shots. I was just amazed at how many people were taking advantage of those things with their kids out biking and walking. And then of course, and we’ve done stories on kayaking and other outdoor activities. I think we’ve done everything you can possibly do outdoors. But that was kind of a cool discovery. And I think people liked that because I think research has shown recently more people have been getting out and walking, hiking, running, boating, and doing all these things more than ever before.

Some good discoveries came out of this pandemic, but also a deeper appreciation for what we do best — telling the stories they are known for because as Elmore says, “The people behind these places are a story in themselves. And it wouldn’t be a story if it’s just food and people eating unless we had a personal story about how a place came about [by asking questions like] Why did you want to do this? What are your customers thinking? Who are they? You know, just kind of a human-interest angle.”

So, the next time you decide to take a drive, take the road less traveled. Seek out adventure. Check out interesting stops along the way because Joe Elmore, our “Tennessee Crossroads” travel guide says, “You could strike out or you could hit gold.”